News
Coronavirus & COVID-19 • Quad Cities News & Resources
Vaccines (Updated 6/15/2021)The Rock Island County Health Department will host three pop-up COVID-19 vaccination clinics this week. The first will be on Wednesday from 9 am until noon at Saint Mary’s Catholic Church in Moline. The second will be on Thursday from 1 to 3 pm at Second Baptist Church in Rock Island. And finally, two state agencies will help offer vaccinations on Thursday, Friday, and Saturday from 9 am until 4 pm at the Bend XPO in East Moline. The Scott County Health Department offers a weekday, Johnson & Johnson vaccine clinic on the 4th floor of the Scott County Administrative Center, 600 W. 4th St. in Davenport. Illinois and Iowa residents are eligible, and walk-ins are welcome.Rock Island County Health Department, 309.793.1955. Tuesdays and Fridays, 9 am until 4 pm (but not during the noon hour) at its offices at 2112 25th Ave. in Rock Island. The CDC has a Vaccine Finder website for the entire country. Click HERE for a Quad Cities area search.Find a list of local providers as curated by the QC COVID Coalition on togetherqc.comCASI, the Center for Active Seniors in Davenport, is helping Scott County residents 65 and older with online vaccine registration. The number to call is 563.386.7477.COVID-19 Testing InformationBesides checking the county health department websites, check HERE for permanent Illinois DPH test sites and HERE for mobile test sites. Community Health Care clinics in the Illinois Quad Cities and the CVS in Rock Island are included, but registration and screening are required.Go to DoINeedaCOVID19Test.com to find pharmacies that offer free testing in both Illinois and Iowa.Iowa residents can register for a free COVID-19 test at TestIowa.com. The Iowa DPH testing in Scott County is by appointment at NorthPark Mall in Davenport.Local Resources:TogetherQC - Quad Cities COVID-19 Coalition ResponseRock Island County Health Department, 309.793.1955Scott County Health Department, 563.326.8618Quad Cities Chamber of Commerce

There were no new deaths in either county (total of 313 in Rock Island County and 239 in Scott County), and the positivity rate in the Illinois Quad Cities is 4%, and it's 7.4% in the Iowa Quad Cities. The rates have been gradually rising over the past several days.

See the slide show above for statistics and graphs showing trends.

Local health officials continue to worry about recent increases in the number of COVID-19 cases and hospitalizations. Rock Island County has reported 13,639 confirmed cases, and Scott County reports a total of 18,370.

In Illinois Region 2, the percentage of available ICU beds is decreasing. It's one of the statistics the state uses to help decide if more restrictions should be implemented. The target is 20% or more.

The test positivity rate (7-day moving average) for Rock Island County is 4.8% and for Scott County it's 12.3%.

Here's a look at the number of COVID-19 cases and deaths per month.

Nineteen Rock Island County residents are in the hospital with the coronavirus infection, 20 are hospitalized in Scott County.

The 7-day-moving average test positivity rate in Scott County is 10.5% and in Rock Island County it's 4.3%.

The number of confirmed cases of COVID-19 in the Quad Cities totals 30,489, with 13,129 cases in Rock Island County and 17,360 in Scott County. The number of cases reported daily has decreased steadily over the past couple of months.

The number of deaths from the coronavirus infection is now 525, with 306 reported in Rock Island County and 219 in Scott County.

As of today, the Iowa Department of Public Health has reported one death in Scott County four days in a row.

The number of cases and deaths per month is shown in the bar graph below.

The line graph in the slideshow above shows case fatality rates for the two counties. Scientists and data analysts say the statistic is not a very good measure of mortality from COVID-19 because it relies solely on numbers of tested individuals.

Those who seek testing are far more likely to have symptoms compared to the general population. In other words, we don't know the actual number of infections in the  population.

But case fatality rates do show trends and help scientists and others make decisions.

For comparison, here's a graph of the Quad Cities recovery rate, based on the same data.

The number of confirmed cases of COVID-19 in the Quad Cities has reached 30,000.

Five-hundred-fifteen (515) local residents have died, with one new death reported in Scott County today. In February, 37 people died of COVID-19 compared to a monthly high of 174 who died in December. Last month's death toll is similar to August when 39 people died.

Both counties' test positivity rates have been dropping. Rock Island County's seven-day rolling average is 2.5%, down from a high of 22.1% on November 15th, 2020. Scott County's is 3.3% compared to highs around 25%, also in November.

The test positivity rate over the past year is slightly decreasing in Rock Island County at 8%. Scott County's has flattened at 21.2%.

The number of people who've received both doses of vaccine is now 9,151 in Rock Island County, or 6.4% of the population. And in Scott County, 8,358 people have been fully vaccinated so far. That's approximately 4.5% of the population. 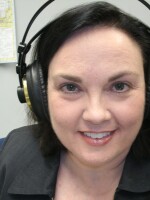 Michelle O'Neill
Officially, Michelle's title is WVIK News Editor which really just means she wears many hats, doing everything there is to do in the newsroom and around the radio station. She's a multimedia journalist and serves as Assignment Editor, reporter, radio news producer, copy editor, announcer, news anchor/host, and photographer. She also writes and produces content for WVIK.org and social media.
See stories by Michelle O'Neill
Latest Stories