The Syrian-American funk and soul band Bassel & The Supernaturals will be in residence from October 18-21, 2021 as part of Quad City Arts’ Visiting Artist Series.

Bassel Almadani is the front man musician for the band and a first generation Syrian-American who uses soulful melodies and highly energetic, funk-inspired rhythms as a platform for communication about the plight of refugees and the devastating civil war in Syria. Born and raised in Ohio, his parents emigrated to the U.S. in the 1970’s from the ancient city of Aleppo. Inspired by the singer Otis Redding, he became fascinated by the ability of artists to effectively tell a story through their music, even in deeply divided times. Now based in Chicago, the band’s motto is “Syrian Heart/Chicago Soul” which is showcased on their most recent full-length album Smoke & Mirrors, released in 2020.

Listen to the conversation here with Bassel Almadani about the deeply meaningful contributions that immigrants make within their adoptive countries; how he creatively connects a difficult and often dark subject matter with music that is inherently light and upbeat; and the empathy and understanding that he hopes to inspire through his music.

Don’t miss Bassel & The Supernaturals at one of the upcoming Quad City Arts’ events: 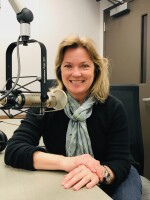 Carolyn Martin
Carolyn Martin joined WVIK as a host of Talking Art in September of 2017. A long-time fan of NPR programming with a love of storytelling and all art forms, she is thrilled to have the opportunity to speak with creative people about their work in the Quad Cities region.
See stories by Carolyn Martin