Analysis: Confederacy 'Not A History To Be Celebrated'

Trump also suggested that if Confederate statues are removed, people will also call for the removal of statues and memorials of some of the the slave-owning Founding Fathers.

Sad to see the history and culture of our great country being ripped apart with the removal of our beautiful statues and monuments. You.....

...can't change history, but you can learn from it. Robert E Lee, Stonewall Jackson - who's next, Washington, Jefferson? So foolish! Also...

...the beauty that is being taken out of our cities, towns and parks will be greatly missed and never able to be comparably replaced!

Political analyst Dr. Christopher Whitt, Chair of the Political Science department at Augustana College, shares his thoughts on the use of monuments or statues as celebrations and tributes to various figures in American history:

On The Link Between Statues of Confederate Generals and Founding Fathers

When we are talking about monuments to the Confederacy and the leaders of the Confederacy, we have to be careful not to have them be conflated with monuments and celebrations of people who could be considered the founders of our country — regardless of if some of those founders owned slaves.

When we talk about the Confederacy, we're talking about people who committed treason, we're talking about people who sought to tear down the United States or tear apart the United States, and they did so with force. A big motivation — if not the motivation — for what they did was the preservation of slavery and all of the accoutrements that would go along with a society that held slaves. That is a very negative moment in history and it's something that can be very hurtful to many people — it should be hurtful to all Americans when we really think back on the many different levels of hurt that come from those types of monuments.

But when we also think about when many, if not most or all, of those monuments start to come about, it wasn't in the immediate aftermath of the Civil War. In the immediate aftermath of the Civil War, we were going through Reconstruction and people who had been part of the Confederacy were trying to figure out their way back into being full-fledged American citizens. We had people like Robert E. Lee and others who said it's not a good idea to have monuments and celebrations of the Confederacy because it keeps those wounds open.

Once that war was over, once you started moving forward, it was the idea of having the union once again. So we end up seeing most of these Confederate monuments come up either in the early 20th century at the heart of the beginning of the modern civil rights era when we had Red Summer, when we had lynchings, we had all kinds of things going on and the federal government was forced to intervene in some instances, very lightly compared to what we would see decades later. But we saw southern cities, we saw leaders in different parts of the country who wanted to erect these monuments to the Confederacy, basically thumb-in-their-noses at people who were fighting for civil rights, and we saw that repeated again in the 1950s and 60s. So it's not really a celebration of history; it's much more of a political statement of resistance to civil rights progress.

"When it comes to those Confederate monuments, they have no place in public sight. They should be relegated to history, to museums, to the trash heap, wherever we want to put them. We certainly should take the time to understand the history and take the time to really reflect on the history, but that's not a history to be celebrated."

When we talk about George Washington, when we talk about Thomas Jefferson and other founders who wrongly and terribly owned slaves and mistreated people and contributed to rape and all kinds of things within the context of slavery, they also still were the founders of this country. They also were still the people that put together what we know now as our system that allows for people of many different backgrounds to chip away at exclusion and become included and be part of this American experiment. So instead of tearing down those monuments, I think that it would make a lot of sense to maintain them, but maintain them in the proper context — to say, here's a monument to George Washington, here are the amazing things that he did in building our country, but also these are the other things that he did and we live with the legacy of slavery and some of that exclusion.

Whereas when it comes to those Confederate monuments, they have no place in public sight. They should be relegated to history, to museums, to the trash heap, wherever we want to put them. We certainly should take the time to understand the history and take the time to really reflect on the history, but that's not a history to be celebrated. There's very much a difference in staying in touch and understanding and learning from it, and celebrating bad things that happened to us as a nation.

On How We Can Learn From Our History

I turn to the model of what we see in Germany, where they have markers and they have signage to remind people of what terrible things happened with the Holocaust, what terrible things were done by the Nazis — but they don't celebrate the Nazis, they don't have schools named after Nazis, they don't have public squares in the middle of cities with statues of these people who tore apart the nation and tore apart Europe and the rest of the world and killed so many people. But they never forget. They teach people to understand what happened, but not to celebrate what happened.

In the United States, we have people of color who have to go to Robert E. Lee High School. They have to ride down Robert E. Lee Boulevard. Think about how that feels when he could be looked at as the symbol of oppression, the symbol of slavery and all of that descension in the United States, and maybe the person riding down that street or going to that school is the descendent of someone who was enslaved. When we think of things in that context and we look to some of the examples from around the world and put our own American spin on it, I think we could come up with a solution that could be useful and helpful for all of us. 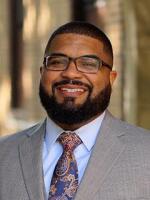