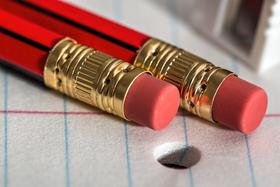 If there’s one thing Illinois lawmakers agree on, it’s that they want schools to open on time in the fall. Yet the Illinois legislature adjourned last week with no school budget in place. That’s because when you ask lawmakers how to pay the teachers and principals and utility bills, they will bicker about it all session long. Their disagreement has left educators across the state saying W-T-F. And you know what that stands for...

To understand how we got into this mess, it helps to understand that school funding is a complicated issue. Committee hearings on school funding involve witnesses who talk about property values, tax rates, poverty concentrations, square roots and curvilinear equations.

FOLLOW THE BILLS: Here's a timeline of school funding proposals

What makes it so complicated? It’s basically because there’s all types of kids, in varying economic situations, but we expect them all to pass the exact same tests. We expect kids in Cairo -- a crumbling city -- to keep pace with kids in North Chicago suburbs. We expect a kid who has to share a computer with four classmates to perform like a child who has a MacBook Air to take home every night. We expect kids who have no school nurse, no guidance counselors, no school social workers, no transportation to show up for school ready to learn every day, just like the kids who have all that and more.

Many states tackle this problem by devoting more money to schools in high-poverty areas. Illinois does the exact opposite, due to the state’s reliance on property taxes to fund schools.

Sen. Andy Manar, a Democrat from Bunker Hill, has been trying to persuade his colleagues to adopt a new funding formula.

In April, Manar filed Senate Bill 231, the third iteration of his plan to completely overhaul Illinois’ school funding formula. His first two versions were cost-neutral, beefing up funding for impoverished schools by cutting funds for rich districts. But this year, Gov. Bruce Rauner said, “No winners and losers,” so Manar’s bill came with a price tag of $600 million. A third of that amount was tagged to pay Chicago teacher pensions (the state already pays teacher pensions in every other school district). But Republicans cried fowl.

“Now, you can say that’s not a bailout of Chicago,” Sen. Matt Murphy, a Republican from Palatine, told the Senate. “But if it walks like a duck, ladies and gentlemen, it’s a bailout.”

Meanwhile, Sen. Pres. John Cullerton came up with two different proposals featuring an “equity grant” to be layered over the current formula as a way to funnel an extra $700 million dollars in General State Aid to the most needy districts. Both Cullerton plans included funds for Chicago Teachers Pension Fund, and therefore failed to get bi-partisan support.

Sen. Jason Barickman, a Republican from Bloomington, has been pushing a new formula he calls the “evidence-based model.” It uses a list of 27 attributes, such as small class sizes, to calculate how much schools need to produce good outcomes. A version of his bill was filed May 23.

A few days later, in what appeared to be a bi-partisan miracle, Barickman’s concept and Manar’s bill were merged into a single piece of legislation that would use Manar’s weighted formula for the 2016-17 school year, and Barickman’s plan thereafter. Sen. Kimberly Lightford, a Democrat from Maywood, carried the bill, and Barickman didn’t like what she did with it.

Manar responded with a question:

“I’m waiting for a bill from the other side of the aisle,” he asked Barickman. “Where’s your bill? Where is your bill to fix the system?”

Three days later, Barickman filed a bill that would use the current formula, but add $100 million in General State Aid and a few million more for a variety of special programs. Gov. Rauner has been touring schools around the state, seeking support for Barickman’s bill.

Republicans have drawn a line in the sand regarding Chicago teacher pensions at a time when that fund has a $700 million payment coming due. Democrats -- make that Senate Democrats -- have drawn their own line regarding equity. Bipartisan working groups are still trying to agree on a state budget.